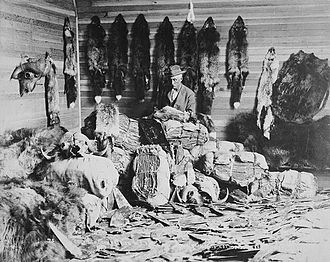 Colin Fraser was born in 1805 in Sutherlandshire, Scotland. He entered the service of the Hudson Bay Company on March 1827 in Stromness, Scotland. Colin Fraser manned the second Jasper House for fifteen years from 1835 to 1850. Fraser, a most engaging Scotsman, commanded the post with his Métis wife and nine children.

In 1831, prior to his arrival to Jasper, Colin married 18-year-old Nancy Beaudry, daughter of Joseph (Gandry) Beaudry, and Lesette Châtelain who was a descendant of one of the earlier French traders Louis Châtelain. Colin, his wife and two-year-old daughter Betsy started their long residence in the Athabasca Valley. When Colin went to Jasper, the aging J.B. Berland was still there and had already given his name to what everyone then called Baptiste’s River, which is now called the Berland. In Colin Fraser’s time in Jasper, there were many families living there including the Wanyandies, Karakunties, Findlays and others.

Although Colin was married to Nancy Beaudry, he had a union with Therese Karakuntie, daughter of Louis Karakuntie, one of the 1804 Iroquois voyageurs. In one archival document, Therese was listed as Colin Fraser’s second wife. Colin and Therese had a daughter that they called Madeleine.

Therese Karakuntie was married to Francois Breland (Berland) and they had six children before Madeleine was born, and four more children after her birth. Madeleine was born in 1847, the same year as her half-brother Colin Fraser Jr.

Madeline Fraser married Alexis Joachim on October 7, 1861. The Joachim family has its roots in the Montreal area. In 1818 the North West Company hired Joachim/Tonatanhan, an Iroquois from the Montreal area, to go to Alberta to trap. The Macpherson database lists his full name as Pierre Yehonnatahe Tawanatahan/Joachim. In 1822-3, the Hudson Bay Company tried to convince some Iroquois stationed in the Lesser Slave Lake region, to go to the Smoky River area to trap, but only Pierre went.  He married Marie Kalahash on October 5, 1853 and Father Lacombe performed the service in Jasper.

Madeline and Alexis’ son, Adam Joachim was born at Berland Lake in 1875 and he claimed Iroquois heritage, and was proud of being Colin Fraser’s grandson. Adam went to Seminary school in Montreal and could speak and read four languages: English, Cree, French and Latin. Adam then became the leader of the Métis that were evicted from Jasper National Park.

Adam Joachim became a prominent leader and legend in the Alberta Northern Rockies region. This educated and brilliant man became a founding member of the Métis Nation of Alberta, along with Isaac Plante on December 12, 1933. This information is outlined in a letter sent from Métis leader Jim Brady to Métis leader Malcolm Norris.

Adam Joachim lived his life as a businessman, trapping and guiding on Alberta’s eastern slopes. His progeny continue in these business ventures to this day.

Many of Colin Fraser’s descendants live in the Grande Cache area, including the Delorme, Joachim and Hallock families.

During his fifteen years in Jasper, Colin Fraser played host to two notable characters. Fathers Francois Blanchet and Modeste Demers went to Jasper in September 1838 and baptized Colin Fraser’s daughters: Betsy, Elizabeth, and Marguerite who was nine months old. In fact, the Mountain Métis community was growing by leaps and bounds, and these two missionaries baptized thirty-two children from the ages of eight months to eleven years.

Colin met another interesting visitor, Artist Paul Kane in 1846. Paul stayed in Jasper on an expedition to Vancourver. Kane wrote, “Jasper House consists of only three miserable log huts. The dwelling-house is composed of two rooms, of about fourteen or fifteen square-feet each. One of them is used by all comers and goers: Indians, voyageurs, and traders, men, women, and children being huddled together indiscriminately; the other room being devoted to the exclusive occupation of Colin and his family, consisting of a Cree squaw and nine interesting half-breed children.” In 1848 Peter Calder guided Paul Kane on his return trip through Jasper, from Vancouver to York Factory in Manitoba. Peter Calder is the forefather of the Kelley, Deagle, and Camp Métis families, who still work and reside in the region.

Colin Fraser left Jasper in 1850 and was transferred to Fort Assiniboine where he remained until 1853. Colin and Nancy had twelve children by the time he assumed the post at Lac Ste. Anne.

Colin Fraser, who for so long had helped so many travelers along their way died in the spring of 1867, leaving a large family. He was buried at the new Methodist mission (McDougall Church). Several of Colin’s sons rose to prominence in the Hudson’s Bay Company. His grandson Adam Joachim was the leader of the Mountain Métis, and a founding member of the Métis Nation of Alberta. Colin’s great-grandson, Allan Joachim followed his father’s footsteps and was also a leader of the Mountain Métis and an active member in the Grande Cache Métis local. The President of today’s Mountain Métis is Alvin Findlay, who shares the Joachim bloodline, and that of Colin Fraser.